Why Am I Going To Wilmington? I Don’t Know But I’m Gonna Find Out! 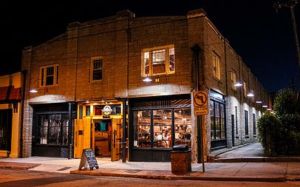 I’m going to Wilmington tomorrow and I have no idea why.

Well, I’ve got a reason, and it’s a very good one. I’ll be talking startup to about 150-200 Wilmington entrepreneurs at the Iron Clad Brewery downtown. They’re gathering at the behest of Jim Roberts, a guy who has put the growing Wilmington startup scene on his back.

I’ll be on stage with two other really sharp folks — Mac Lackey and Brandon Uttley from Charlotte, and the News and Observer’s Ben Brown is going to moderate. I have nothing prepared, but I rarely prepare for these kinds of things. I’ve got 20 years of prep in the bag, so it’s just a matter of pulling out the right mental folder of stuff when I get there.

So in that sense, I’m actually a little giddy at how much fun it’s going to be.

But if you were to ask me why I’m doing it, what’s the payoff, the ROI, the reward for the risk (there’s very little risk anyway), I couldn’t give you a serious answer.

You can’t win if you don’t play, and you can’t play if you don’t show up. I’ve got a pretty solid history of speaking engagements I’ve done, a long list of events I’ve gone to, thousands of meetings I’ve taken, introductions I’ve made, coffees, beers, and lunches I’ve agreed to (and I hate when people pay for my coffee, beer of lunch, so that gets costly).

I’m very careful about what I take on and what I don’t. I have to be. My life is a delicate balance of time management, and one errant hour can throw off an entire day, which can disrupt the whole week, which can mess up my month, which can lead to divorce, bankruptcy, and legal hot water.

Man, I’m exaggerating. But sometimes I just want to read a book after work, you know? I’m 2/3 of the way through The Martian right now. I know I’m late to the party but it’s incredible anyway.

The real reason is that as an entrepreneur, you actually have to have more focus on the game than a regular job. I know I’m locked in from 6:00 a.m. to 10:00 p.m., pretty much seven days a week. And even as the guy who rails against the monotony and begs you to stop working every so often and expand your physical and mental universe, I realize that’s grounded in the grind, so to speak.

So that 30-minute coffee is a revenue hit. It’s just the way it is.

As diligent as I am about making sure that each meeting I take, event I drop in on, and beer I drink has a purpose, every once in a while I do something for no good reason. Just because. And nine times out of ten I come away from whatever it is with more ROI than I could have imagined before setting out.

So plan carefully when you’re arranging your calendar, but not too carefully. Pick one or two things in a month — whether it’s a networking event, an online course, a quick side project, or whatever, and do it just to do it. The less valid the reason you can come up with for wasting one to three hours on it, the better.

In the end, it’ll fit in somewhere.