WILMINGTON, NC: THE COASTAL TOWN WITH A RISING ENTREPRENEURIAL TIDE 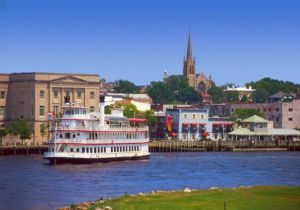 Our understanding of success is often manipulated by the lens of retrospection: We piece together a story based on our own recollection of events, constructing a narrative that’s influenced by our worldview and personal experience. Yet what makes Wilmington, North Carolina so interesting is that it’s in the midst of a kind of economic and cultural transformation, one that can be documented and understood in real-time.

If you asked 10 different people why Silicon Valley is the world’s foremost center of technological progress and innovation, you’d likely get 10 different explanations, each as plausible and accurate as the next. Though you could still very well hear a range of reasons for Wilmington’s burgeoning economy, it’s evident that there are certain factors—some tangible, others less so—driving its evolution.

For many of the people who came of age and still live in Wilmington, the pace of economic and entrepreneurial change has notably reached a boiling point. You can count Andrew Williams, the founder and chief executive officer of Elite Innovations, a hybrid makerspace and product development company headquartered in the city, among this group. “When I was growing up here, there wasn’t an infrastructure or a startup ecosystem. It just didn’t exist,” Williams tells Free Enterprise.

“The last 12 months in Wilmington have been exponentially better than the past. The entrepreneurial community is here. There’s infrastructure here. We have a number of accelerators and incubators around town that are helping people to build professional networks and advance their businesses. You have folks like us who are pretty focused on the product side of the equation, and the community support is also certainly here.”

Williams, who graduated from a local high school, has a deep understanding of what Wilmington was and is. It’s something that informs his work at Elite Innovations, the third successful business he has started in his still-young career. Launched in 2013, the organization works with local entrepreneurs and aspiring inventors to bring their ideas from concept to reality.

Apart from housing technological equipment like 3D printers, the makerspace component of Elite Innovations also holds workshops for people who want to learn the ins and outs of its various machinery. Through its product development side, Elite Innovations works directly with local entrepreneurs to help turn ideas into a physical good or product. “One side of the business puts the onus on the individual, while the other puts the onus on us,” explains Williams.

There are a lot more people like Williams around Wilmington than there used to be. He sees this firsthand at Elite Innovations. “A year ago, we had two people in our space. Of those two people, one was a UNCW grad,” Williams says. “Now, there’s a combination of about 12 people in our organization. Six of those people are UNCW grads, one is a Cape Fear Community College grad, and all of them have tech backgrounds. I’d say in a year’s time, that’s pretty significant that we have seen that sort of turnaround.”

Part of the equation is something that Jim Roberts, Executive Director of both NEW (Network for Entrepreneurs in Wilmington) and WALE (Wilmington Angels for Local Entrepreneurs), refers to as “quality of place.” A big part of Wilmington’s draw has always been its climate and coastal location, and a rapidly improving business environment only adds to that. “If we can attract more companies, that starts a cycle that attracts more people,” Roberts says.

This kind of anecdotal evidence is indicative of a larger trend, according to data from the North Carolina Technology Association (NCTA), a nonprofit dedicated to advancing the state’s tech sector. “In just the past couple of years, we’ve seen an uptick in the number of tech startups in the greater Wilmington region as evidenced by an increase in those joining the NCTA, news of funding going to area companies, and companies being recognized at our annual NC Tech Awards event,” says Brooks Raiford, the organization’s president and chief executive officer.

“We’ve had more than a couple dozen new Wilmington area members join that state’s tech association including: Blue Label Hosting, CastleBranch, CloudWyze, DocsInk, Koolbridge Solar, KWIPPED, nCino and Wide Open Technologies to name a few. We have also partnered with area business and university leaders, many of which are focused on building a support system for a growing tech ecosystem.”

This growing chorus of entrepreneurial activity is beginning to reach a fever pitch in Wilmington, creating the kind of forward momentum that attracts the sort of creative and innovative thinking that defines the business landscape of cities like San Francisco, New York, and Austin.

Yet Wilmington’s success is, in many ways, attributable to another of its defining characteristics. It’s a staple of the entertainment industry, having served as the backdrop for hundreds of feature films and television shows. Wilmington’s creative class is a part of its fabric, and it’s not something that you have to be an artist or a musician to appreciate, says Elizabeth Marion, the director of operations at Elite Innovations.

The Cucalorus Film Festival, for instance, has drawn crowds to the city for more than 20 years. But with the debut of CONNECT, Wilmington is leveraging its creative identity and artistic talent in an entirely novel way this year.

Sponsored by the University of North Carolina Wilmington’s Center for Innovation and Entrepreneurship, CONNECT is kind of like the city’s version of South by Southwest Interactive: It’s a five-day-long conference designed to bring together creative- and business-minded professionals through panels and other events. “The whole point of CONNECT is to see what happens when you actually bring together creatives and business people,” Marion says.

“Even though it’s the event’s first year, there are a number of thought leaders and speakers who’ll be attending. I think that just speaks to the entrepreneurial and creative scenes here, and how we’re joining the two together to create an even more entrepreneurial startup community. I think it’s important to mix what’s new in Wilmington and what’s been happening for a while in terms of the creative scene.”

Much as in anything else in life, success begets success. With a string of wins under its belt, Wilmington is pushing forward by both playing to its strengths and uniting behind them. “We are very excited about the growth of tech startup scene in the great coastal community of Wilmington,” the NCTA’s Raiford says.

Wilmington and the Future

There is, of course, a lot of work still left to accomplish. As in many other places, it can be difficult for fledgling businesses to get funding. Wilmington’s business infrastructure is also still in its early stages of development. But there’s a palpable sense of excitement in Wilmington that’s infectious, one that you don’t often feel in other cities.

What’s clear is this: A diverse array of factors has coalesced in Wilmington to fuel an entrepreneurial and economic renaissance that’s barreling ahead like a boulder down a mountain. “In Wilmington, we’re seeing more and more innovative startups that are going to add jobs at quite a faster rate than we’ve seen in the past,” Williams says.

“A lot of the things that I’d like to see are in the works and happening, everything from better infrastructure to improved networking opportunities. I know it’s early, and these things are ongoing, but I feel like the more they’re solidified and streamlined, the faster we’ll see results take hold. We’ve got space, we’ve got property, we’ve got ideas, and we’ve got startups, so you’re going to be hearing a lot more about Wilmington.”