Startups: Does Wilmington Have The Right Stuff? 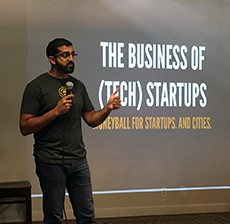 Paul Singh is on tour, and all this week he’s in Wilmington.

But Singh isn’t a singer-songwriter, or actor, or magician. He’s more of a preacher, and he’s preaching the gospel of entrepreneurship.

The Washington, D.C.-based entrepreneur and venture capitalist has been all over the country this year, towing his Airstream travel trailer and visiting the places that startups actually start – and grow – their businesses.

Wilmington is his only Results Junkies Tech Tour’s stop in North Carolina. Local entrepreneur Jim Roberts, founder of Network for Entrepreneurs in Wilmington (NEW) and also the Wilmington Angels for Local Entrepreneurs (WALE), an investor network, has worked in tandem with Singh in hosting events here through Thursday.

Both Singh and Roberts are bullish on Wilmington and its ability to be a successful startup community, teeming with talented entrepreneurs.

“Wilmington is much further along than I was led to believe,” Singh said Tuesday after a panel discussion held at Ironclad Brewery. “As an investor I have to chuckle, because everyone thinks this is a vacation destination, a beach town, so I’m here seeing stuff before anyone else, and seeing that the company is good.”

Roberts believes that the time is ripe for the Port City to turn up the volume of its entrepreneur spirit.

“Everyone in the country knows about Raleigh-Durham; well we’re just two and a half hours away. So we’re trying to draft off of their success,” Roberts said. “All those guys in Raleigh-Durham, that we all know, all have a beach house. They don’t have a Winston-Salem house, they don’t have a Charlotte house, and they have a beach house here. So if we can say to them ‘Hey when you come down Saturday and Sunday, take another day or two and you can mentor some of our entrepreneurs and maybe invest in some of our startups’. That’s what we’re trying to encourage.”

City leaders are also bullish on the area capturing the buzz that places like Austin, Boulder and Raleigh-Durham have captured with the startup spirit.

“Each year over a dozen new entrepreneurs invest in downtown,” said Ed Wolverton, president and CEO of Wilmington Downtown Inc.

“One item to note is that Paul Singh is focusing on technology based startups. While downtown has its share of tech and is collaborating to add more, the center city also appeals to new entrepreneurs in retail, restaurant, entertainment or professional services,” Wolverton added.

“I believe our area is primed for growth in entrepreneurs coming here,” added Mitch Lamm, chairman of the Wilmington Chamber of Commerce. “We have a thriving downtown area that attracts startups. We also have a chamber of commerce that is focused on entrepreneurship by making large investments into UNCW’s Center for Innovation and Entrepreneurship and Cucalorus Connect. Having success with a few startups will lead to other ambitious entrepreneurs coming to our area.”

But some entrepreneurs still aren’t convinced that Wilmington is up to the task of becoming a startup city.

“Short answer, no,” was the response of Polly Harman this week when asked if Wilmington is a great spot for startups and entrepreneurs.

Harman is the owner and CEO of Pursuit Enterprises, which she formed in 2011 to develop and commercialize patented sleep-awake technologies destined for the large and high growth OTC sectors.

“Three years ago I was unable to get any traction with the investment community here so I traveled to California, Pennsylvania, New Jersey and the D.C. area. I was offered opportunities, however I was required to relocate, which I preferred not to do,” Harman said.

But she said things could improve.

“Jim (Roberts) introduced me to resources in the Raleigh area where I met some amazing mentors and received an offer for funding within four months,” she said. “This proved to me that I did have valuable IP, market potential and a disruptive technology that was appealing to investors, just not here in the Wilmington area.”

For Roberts, the challenge is brain drain.

“So we are missing 30 years of economic impact of their individual income,” he added. “Wouldn’t we rather keep that money here, during those 30 years, because we know those people want to live here anyway?”

Singh added that it’s almost as if entrepreneurs are too hesitant or sheepish.

“I think all the ingredients are here. It almost feels like people are waiting for permission, to build something amazing,” Singh said. “I think Wilmington has a leg up, on entrepreneurship and building an entrepreneurial community because not only do you have the ability to train your entrepreneurs here to get them to start more things and build more things, but you also have this tourism industry that a lot of cities around the country would kill for.”

Next up for Singh and his tech tour is Fort Wayne, Indiana later this month and Columbus, Ohio in November.